skip to main | skip to sidebar

Funny thought occurred to me yesterday.

I was helping a friends son to make a volcano.  Interesting though that he had a lot of trouble getting motivated for the project. The laptop was a constant distraction for him. I just observed the whole process. My participation was mostly just to point the family at my video tutorial on how to make a volcano.

About an hour later the project was just about done, needing only paint. And I chirped in a bit; giving him praise for doing a nice job. He didn't respond much to that.

"You made something with your hands. You did it yourself." That wasn't fun?
"No, it was work"

I was a bit stumped here. Trying to figure a way to make it a positive experience for him.

"But firing off that volcano will be fun right?"
"Yes"
His disposition brightened a bit.

The  interaction triggered a series of thoughts in me.

On a daily basis I make things. That's my "job". And I enjoy it thoroughly. But it occurred to me that there is a subtle goal with certain things like catapults and volcanoes. The building is an act of bringing the thing to "its" potential. You build it then release it to do what it was supposed to do.
The catapult shoots its projectile and the volcano erupts its magma.

There are two joys in all this.
The first joy is the feeling of the work I am doing. The second joy is the knowing that the catapult, or volcano, has become what it is supposed to be. It does what it was meant to do. It can only be that which it is. That which it was meant to be. And it does it with perfection. I can't interfere in that. I have to release it to be what it is. And feel the fun and joy of that.

And therein lies the parallel to God - and why he doesn't interfere in our lives.

Starry under a sky 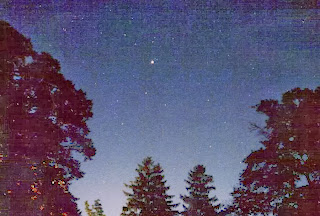 The photo above is Jupiter in Sagittarius. Just a simple star photo I took with an old film camera.

I was over a friends house. We dragged the telescope out of the house and let it cool down in the Winter air. Then we pointed it around at some easy things like Jupiter, the moon and the Andromeda Galaxy. These things are old friends to me. I have pointed telescopes at them many times over the past few decades.
It has been a long time since I was with a telescope and the joy within me was overwhelming. It just burst within me.

Well, on to the actual story I want to tell. My friend is a good man. We went around the other side of the house, to the back, to see if the sky was darker and if there were any different celestial objects that might be seen. It was after a wonderful hour of observing through the scope.

He felt the need to talk about something.

"You know, I was a religious man, went to church and followed that for a while. Then I went even more extreme and joined a very strict religious organization. We observed no work from dusk on Friday until dawn on Monday. It was very strict and I did that for ten years." He paused and I waited for him to continue. "But I have come to the conclusion now in my life that there is no God. I am now a devout atheist".

He looked at me for a response.

All I did was look up again at the stars.

.
.
About me
I am a dyed in the wool Agnostic. Always have been.  That means I just don't know anything and I admit it. Know nothing, zero, nada, zilch.. But sometimes, under a starry sky, and the absolute magnificence of it I do wonder.

The Journey and the Destination or the destination is the journey?

Well, Interesting thing I have been going through lately.
You see some eight odd years ago I embarked on my quest to find "The" answer. The real meaning of it all, the  secret to be revealed. And I had a two-pronged attack.
Prong One: Continue with the thinking, reading, searching
Prong Two: Build a business that would give me the means to support my quest. The goal was to build it to the point where I could retire and devote myself to the search.

Well, picking out the business was a tricky thing. I wanted only to engage myself in activities that brought me joy. I know I only have so many hours left and I wanted to use them wisely. That hard line decision was a challenge. There was a period of time where I had to cancel my phone, take my car off the road, turn the heat down to 60 and eat in soup kitchens. True story. But I stood true to the ideal. It's important to me.

Ok, through that fire and a few years later I find myself in a peculiar place. The business is built and doing well. I am probably now at that point where I could retire and  focus on my quest. Really. The business should keep me well until I die. I could walk away  and focus solely on the quest.

But what would I do?  Quit the business that I have grown to love and sit under a bodhi tree? Travel to Tibet? Go see the dalai lama? Seek a meeting with the pope?

And in giving this whole situation a lot of thought something has occurred to me.

I have very much enjoyed the adventure of building a business, and by staying the course to only pursue what gives me joy. It has been a wonderful journey. It's as if Iktomi himself has had a hand in this and sought to grant me the possibility of a small wisdom -Maybe the journey of building something out of sheer love and joy is the meaning of life.

Toys in the attic and the meaning of life

First a story....
I grew up in a pretty typical american setting... suburbs, nice home, local school, christmas mornings, etc. My bedroom had two doors. One door was to the rest of the house and the other door lead up to the attic. Bit of a quirky thing.

Every year, during the holiday season, my parents would make trips up to the attic carrying our christmas presents. They would place them in a pile on the attic floor, cover them with a blanket and lock the attic door behind as they left.

Every year I would sneak up the attic stairs and peek through the keyhole trying to get a glimpse of  the presents. True story. All I ever saw was a blanket draped over things.

So now it's many years later. I am a full grown adult and I am peeking through a keyhole, trying to get a glimpse at something. Still no luck.

Second an insight..... maybe/maybe not

My parents in their wisdom and their love kept the gifts away from me. This is because they knew it was best. My joy would be good if I waited until I crossed that threshold of night into Christmas morning.

So the easy inference here is: Is it the same for the meaning of life?  Will I cross a threshold into revelations and joy?

First the what and then the how of it

This is a bit of a peculiar post and I will try my best to put it all into the proper context.
Typically, from my experience anyway, we are creatures that like to follow a certain process. It's the cause and effect thing.  First see the goal, then figure out how to get there. That sums it up nicely. First understand what it is you want to achieve, then figure out how to achieve it.

This kind of thing goes for every single thing we do/are.

What is the purpose for all this? What is the reason why I am here? What the the thing I am supposed to be achieving?

If I knew that the second half of the causal chain would be easy. I would be able to take the actions needed to move me toward that goal. Even if the action was something as nonaction as meditating on the top of a mountian in Tibet.
Posted by Will at 12:30 PM 4 comments:

Color Blind to the Meaning of Life 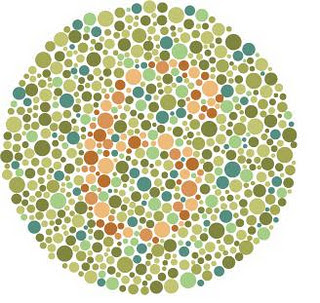 To best describe how I feel about this whole quest for the meaning of life I will tell you a little story from my life.
I very clearly remember a heath check up in high school. And that was a very long time ago.  The school nurse administered a variety of tests. One of which was a vision test. Part of that was a series of cards that checked for color blindness. She showed a series of cards with colored bubbles. Embedded in each circle was a number. 12, 6, 24 etc. I easily worked my way through the cards until I got to one that showed no number. I stopped. The nurse stared at me. There was no number. "can you see the number?" she asked me.
I shook my head. "There's a number there?"
"yes" she said. "But that's ok. It is ok if you don't see that one. It's pretty common."
I was thunderstruck by this.
How is it possible for something to be there, to be obvious, yet not be seen?
And this summarizes how I feel about  the secret of everything, the real meaning of it all. The thing we cannot see or feel or know.
Is this the thing? Am I missing something? Is there a tool or a thought or a thing that I don't have that prevents me/us from seeing the secret?
Is it right there and clear as day yet unseen?
﻿
Posted by Will at 1:15 PM 7 comments:

The difference between in and of

I get regular email from people. Because of this blog and because of a lot of stuff I have on my website that revolves around my search for the meaning of life.

Almost always the email is from a good and kind person who just wants to help. They always offer advice by telling me about how they get deep meaning and satisfaction in their lives by giving to others, by being with family, by contributing to humanity.

This is all true. We are social creatures, community, family, love, caring and many other things give us a deep sense of meaning in our lives. But.....

But, This really isn't what I mean. I am trying to pull away the curtain, rake my fingers through the air and catch a small corner of the fabric that can't be seen, and tear it down - to gaze upon the secret that can't be known. The mystery that can't be explained. The meaning of life.

There is a very big difference between in and of.
Posted by Will at 6:30 PM 1 comment:

Email ThisBlogThis!Share to TwitterShare to FacebookShare to Pinterest
Labels: the meaning of life
Older Posts Home
Subscribe to: Posts (Atom)

Promote Your Page Too